Plein air or sketching/drawing/ painting an outdoors scene at the location, is rewarding in itself. This time I found a nice 'spot' which gave me a very aesthetically pleasing frame of a house, trees, dappled shade, etc. A motorbike parked in the middle of the open space added just that bit of interest and spice to an otherwise typical landscape. I therefore decided to include the bike in my painting and drew it accordingly. So far so good. Then I started fiddling with getting the paints and brushes out,  pouring the water from the bottle into a bowl, arranging all the paraphernalia that accompanies an artist on such location work. by the time I finished and looked up, the motorcycle had vanished from the spot, the owner having finished his business having driven off.
So the bike in the picture is painted purely from memory after trying to recollect how the lights and darks looked or would logically appear. Here is the completed watercolor. 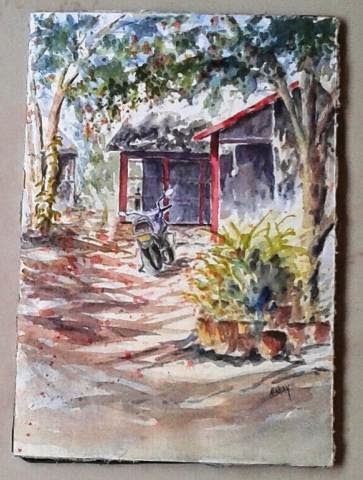 Posted by indiwriter at 22:10 No comments:

My favorite subjects are still life and nature. Glass and water attract me the most because of their translucence, the lovely reflections and distortions, and the overall complexity.

For purchase of my work/ enquiries write to me at:
indiwriter@gmail.com

indiwriter
Sum of many parts. Voracious reader, avid birdwatcher, love traveling, trekking, enjoy music, sketching, painting, and occasionally blog on food. My poetry and non-fiction have been published in print and on the web.